Harbor House Hotel sits on the site of an early Galveston Steamship Terminal and, today, provides a vantage point for portside ship watching and is the hotel of choice for cruise ship passengers seeking pre- and post- cruise excursions on the island. Nine boat slips adjacent to the hotel welcome guests to sail in for a stay.

The 42-room hotel, located at Pier 21 and including three one-bedroom suites, just completed a $1.7 million renovation giving rooms a bold new look and modern appointments. The hotel’s guest rooms now offer an industrial yet warm feel with all new furniture, lighting, bedding, flooring, and bathrooms. All guestrooms are spacious and include a four-in-one built-in cabinet housing a refrigerator and microwave and serving as a dresser and desk. Rooms offer a 46” LED flat screen television, custom upholstered bedding system by SK textiles, custom headboards, and Simmons® Pillow Top Mattresses. The rooms feature nautical themed photography printed on aluminum by Kayla Mitchell.  She captured images from Galveston Island to create one-of-a-kind pieces that are unique to the hotel.

Pier 21® is a waterfront entertainment and dining area located on Galveston’s historic harbor in The Historic Strand Seaport Area.  Pier 21® offers diverse waterfront dining, a variety of attractions including harbor tours, a documentary theater, and museums as well as Harbor House, the only hotel and marina on Galveston’s harbor.  Mitchell Historic Properties (MHP) owns and preserves approximately one-fourth of the buildings in The Historic Strand Seaport Area including Pier 21®.

A complimentary Continental breakfast is served daily at the hotel and guests are welcome to enjoy signing privileges at both The Tremont House and Hotel Galvez & Spa®. Olympia The Grill at Pier 21, a Mediterranean restaurant, is located on the first floor. Other nearby restaurants are Nonny Tony’s World Kitchen, Willie G’s Seafood and Steakhouse and Fisherman’s Wharf Seafood Grill and all offer local treats, fresh seafood and Galveston charm.

Toujouse Bar at The Tremont House

The imposing Toujouse Bar in the hotel’s inviting lobby offers a relaxing atmosphere after long days of meetings or city exploring. Live piano music sets the tone as guests sip cocktails in this elegant setting. The Toujouse Bar is also host to a Jazz Series on Fridays and Saturdays from 6 to 10 p.m.

The Rooftop Bar at The Tremont House

The Rooftop Bar is the only outdoor venue on the island to offer a bird’s eye view of Galveston. Guests can see the historic harbor, downtown, ship channel, beachfront and other landmarks from this rooftop setting. The Rooftop Bar is open Wednesday through Saturday evenings (weather permitting).

Galveston Island is the No. 2 tourism attraction in Texas for in-state and out-of-state travelers. Galveston is a historic beach town located just 50 miles south from Houston, Texas – the fourth largest city in the U.S. A diverse cultural town, Galveston Island is a unique destination offering 32 miles of beaches, a variety of family attractions and resorts, one of the largest and well-preserved concentrations of Victorian architecture in the country and Texas’ premiere cruise port.

Tucked away off the southeast corner of Texas, this island city is named after Bernardo de Gálvez, the Spanish Colonial governor who ordered the first survey of the Texas Gulf Coast in 1786. The surveyor, Jose de Evia, named Galveston Bay in honor of the governor and the island was later given the same name. Ironically, Bernardo de Gálvez never visited the island that bears his name.

In 1817, Pirate Jean Lafitte made his home base in Galveston, having been expelled from his settlement in Louisiana. He laid claim to the lavishly furnished mansion that he named Maison Rouge and established the new settlement of Campeche. In 1822, one of his captains reportedly attacked an American merchant ship and Lafitte was forced out of Galveston by the Spanish. Prior to leaving, he held a party for his pirates with much wine and whisky and then proceeded to burn his settlement. Legend has it that he buried treasure on the island, but it is yet to be found.

The Great Storm of 1900 suspended development on the island when the deadliest natural disaster in the United States tore through the city with 120 mile per hour winds and 20-foot waves, killing over 6,000 people in its wake. Following the tragedy, citizens showed an indomitable spirit of survival as they began to rebuild the island. Nearly every structure left standing in the city was raised and sand was filled in beneath them raising the grade of the entire city. A 17-foot seawall was built to protect the island from future tidal surges and the city undertook a 14-year grade-raising program to elevate the level of homes and businesses and prevent flooding.

The Historic Downtown Strand District for shopping and dining

Baywatch Tours and Galveston Harbor Tours Aboard the Seagull II

Pirates! Legends of the Gulf Coast and Haunted Mayfield Manor 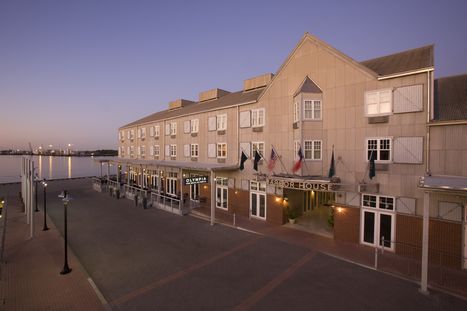 Harbor House is the only Galveston hotel that overlooks the islands historic port.