Hotel Galvez & Spa®, A Wyndham Grand ®Hotel, is the only historic beachfront hotel on the Texas Gulf Coast. This historic hotel celebrated its centennial in 2011 and continues to be an integral part of Galveston’s history and a symbol of the community’s resilience following the 1900 Hurricane.

The Sept. 8, 1900 hurricane was the worst natural disaster in United States history to that point in time, and remains the country’s deadliest natural disaster killing an estimated 6,000 to 8,000 people. More than 3,600 structures were destroyed including the entire wharf front. At the time of the hurricane, Galveston was a thriving port city with a population of 37,788, and home to various Texas’ firsts including the first medical school, nursing school, country club and golf course, customs house, post office, insurance company and many other notable firsts. Following the devastation of The 1900 Storm, a group of businessmen pooled resources and raised $1 million to build Hotel Galvez.

When Hotel Galvez opened in 1911, Galveston had just finished building its 17-foot Seawall to protect the Island and its grade raising project which raised the grade of land as well as hundreds of buildings from their original level to make them less susceptible to flooding in the event of future storms. The Causeway had been completed, now connecting Galveston Island to the mainland. All of these accomplishments were part of the Island’s recovery following The 1900 Storm.

Hotel Galvez opened on June 10, 1911, at 6 p.m. and was immediately proclaimed “Queen of the Gulf.” Within a year of opening, it was deemed the “best arranged and most richly furnished seaside hotel in America” by Hotel Monthly. When the hotel opened in 1911, it had 275 guest rooms with a room rate starting at $2 per day. The hotel boasted modern, time-saving tools such as a potato peeling machine, an ice-maker, a dishwasher and an ice cream maker. The hotel also touted having a concrete wine cellar, a printing press, and a company that made roller chairs.

The hotel served as a temporary White House for the staff of President Franklin D. Roosevelt during a 10-day offshore fishing trip, and was the site for his first meeting with newly elected Congressman and future president Lyndon B. Johnson. A reception in honor of war hero and future president Dwight D. Eisenhower was also held at the hotel.

In the early 1920s, families across the country began flocking to Galveston’s original beachfront hotel. “Moving in” to Hotel Galvez for the summer was a common trend among wealthy families, many of whom spent from six weeks to six months in the hotel, paying a mere two dollars a day for luxurious accommodations. The hotel provided such amenities as a barbershop, laundry, writing room, and tailor as well as easy access to the bathhouses and entertainment along the beachfront.

Between 1920 and 1932 Hotel Galvez served as headquarters for the International Pageants of Pulchritude, the beauty pageants that were predecessors to the Miss Universe Pageant. The hotel was also the venue for many debutante balls, as well as social activities for the University of Texas Medical School fraternities throughout the 20s, 30s and 40s. Over the years, various entertainers who performed at the famed Balinese Room were frequent guests of the hotel including Dean Martin and Frank Sinatra. The hotel’s penthouse suite was the site of band leader Phil Harris and actress Alice Faye’s wedding.

The hotel functioned as a working facility for the U.S. Coast Guard during World War II and in 1944 the hotel was awarded an “honorable discharge” from its duties. During the years, the hotel was owned and operated by several individuals and companies.

In 1993, it was purchased by its current owners who launched a $20 million restoration to reflect its 1911 origin. In 2005, the owners made a second renovation to the hotel removing the lobby’s heavy drapes, restoring the windows to the original appearance and adding the Oleander Garden. In 2008, the owners added a nearly 10,000 sq. ft. spa. The Spa at the Hotel Galvez offers nine treatment rooms, an accompanying salon and fitness center on the hotel’s lower level.

“Hotel Galvez is a great symbol for Galveston. It is a symbol of strength and resilience,” says C. Grant Mitchell, President of Mitchell Historic Properties and producer of “The Great Storm,” a multi-image documentary on The 1900 Storm. “Its position overlooking the Gulf and its prominence are so striking that it has pulled my parents and family as a whole to restore it to its former grandeur.”

In preparation for the hotel’s 100th anniversary in June 2011, hotel owners George Mitchell and the Mitchell family completed an $11 million renovation. The owners replaced the Gulf facing windows throughout the hotel with operable, divided light windows reminiscent of the hotel’s original design and updated the guest rooms and suites with a new décor including new furniture, bedding, drapes and flat screen televisions. It also converted its sixth floor to spa-inspired rooms. Additionally, the hotel repurposed space used for a valet lot to new outdoor green space called Centennial Green. A similar park area existed in this space when the hotel opened in 1911.

As part of the centennial, the hotel released a commemorative book entitled Hotel Galvez: Queen of the Gulf, by Gary Cartwright, author also of Galveston: A History of the Island. The commemorative book includes a foreword by Peter H. Brink, former executive director of the Galveston Historical Foundation, and new color photography by the nationally known architectural photographer Carol Highsmith.

Hotel Galvez & Spa®, A Wyndham Grand® Hotel, is the only historic beachfront hotel on the Texas Gulf Coast. This 224-room, century-old hotel offers 13,000 square feet of meeting space, a 9,763-square-foot spa, fitness center, full-service restaurant, lobby bar, pool with a swim-up bar and Hall of History. The hotel is rated four diamonds by AAA and is owned by the Cynthia and George Mitchell family as part of Mitchell Historic Properties. For reservations, call (800) WYNDHAM, or visit www.WyndhamHotelGalvez.com.

About Wyndham Grand®
Wyndham Grand® is an ensemble of distinguished hotels that are approachable by design, representing one-of-a-kind experiences in key destinations with refined accommodation, attentive service and relaxed surroundings. A part of Wyndham Hotel Group, the Wyndham Grand family currently consists of more than 40 locations around the world. Additional information is available at www.wyndhamgrand.com. Most Wyndham Grand® hotels are franchised by Wyndham Hotels and Resorts, LLC or its affiliates. Certain Wyndham Grand hotels are owned or managed by an affiliate of Wyndham Hotel Group, LLC. Wyndham Hotel Group is the world’s largest hotel company based on number of hotels, encompassing more than 8,000 hotels and over 699,700 rooms in 79 countries.  Additional information is available at www.wyndhamworldwide.com. For more information about hotel franchising opportunities visit www.whgdevelopment.com. 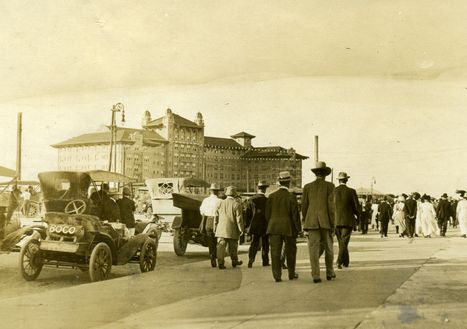 Hotel Galvez is the only historic beachfront hotel on the Texas Gulf Coast. Photo Size: 4888 X 1652