Hotel Galvez Story of Ghost Bride and Other Ghost Stories

“Every great hotel must have its ghost, and the Hotel Galvez has one who has been around at least a half century. According to Jan Johnson (a fifth-generation Galvestonian and the author of Walking Historic Galveston), the Galvez ghost could be a bride-to-be-named Audra. Legend has it that was about twenty-five years old and stayed in Room 501. Then tragedy befell her.
In the mid-1950s, Audra was engaged to a mariner who sailed in and out of the Port of Galveston. Whenever his ship was due in port, she would leave Room 501, take an elevator to the eighth floor, and climb the narrow ladder that opened into one of four metal-ribbed hexagonal turrets that sit at each corner of the main red-tiled roof. Sheltered from the weather, she would wait inside the turret and watch through an opening for her lover’s ship.
Then there was a mighty storm and for days no word of his ship. Finally Audra heard that the ship had gone down and that all hands were lost. She refused to abandon hope, however, and continued to climb to the roof each day, praying for some sign. But no ship was every sighted. In despair, according to legend, she hanged herself in the west turret.
But that was only half of tragedy. A few days after her death, her mariner appeared to the hotel, very much alive and looking forward to a marriage that was never to be.
Nearly everyone on the hotel staff has heard the story and some believe it is true. “Her spirit is locked inside the hotel – she never crossed over,” suggested the senior concierge Jackie Hasan, who was born on the Island and is the fourth generation of her family to work at the Galvez. Hasan has felt the presence not only of the Ghost Bride but also of other spirits who dwell at the hotel. “My father was a mortician,” she explained, “and I think my familiarity with death makes the spirits feel comfortable with me and me with them.”
Hasan conducts ghost tours and encourages guests to keep an eye out for orbs of light and other paranormal features…”
Other Ghost Reports
In addition to the Ghost Bride story included in the above excerpt from Hotel Galvez, Queen of the Gulf, staff has reported seeing the ghost of a young girl bouncing a ball in the lower level of the hotel. Housekeeping staff has also reported feeling the presence of a man in the corner of the hotel’s laundry room. While this activity was reported in the lower level of the hotel, staff and guests have also experienced odd occurrences in the restaurant and lobby, such as candles blowing out on their own and dishes moving or breaking. Guests and staff have also reported hearing breathing sounds in the ladies’ bathroom near the Music Hall and children’s laughter in the salon bathroom.
Following Hurricane Ike, which struck Galveston in September 2008, several members of the hotel staff who stayed at the hotel as their homes were being repaired reported seeing a woman dressed in an old-fashioned maid’s uniform and a man walk through a guest room and disappear.
In September 2009, Discovery Channel’s Ghost Lab featured Hotel Galvez while investigating a correlation between weather and the paranormal. The hotel was also included in an episode on the Travel Channel’s Ghost Stories called the “Ghost of Sister Katherine.” 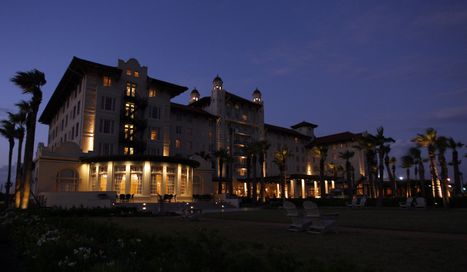 Hotel Galvez is known for being a haunted hotel. The hotel offers public ghost tour dinners during the month of October.
Hotel Galvez at Dusk
View | Download 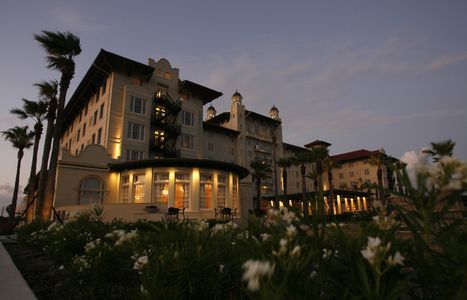 Hotel Galvez is known for being a haunted hotel. The hotel offers public ghost tour dinners during the month of October.