Complex General Manager Steven Cunningham received the American Hotel & Lodging Association’s (AHLA) Outstanding General Manager of the Year (Large Property) as part of the 2019 Stars of the Industry Awards held in Los Angeles earlier this week. This event recognized top hotel employees in the hospitality and lodging industry for their outstanding accomplishments, service and leadership.

Cunningham, a 30-year hospitality veteran, is complex general manager for Hotel Galvez & Spa®, A Wyndham Grand® Hotel, The Tremont House, A Wyndham Grand® Hotel and Harbor House Hotel & Marina at Pier 21 in Galveston. He has served in this role for the past nine years. He is the chairman of the Galveston Hotel & Lodging Association, a Wyndham Hotels representative on the board of the Texas Hotel & Lodging Association and is actively engaged in the Galveston tourism industry.

According to the AHLA, his passion for the industry and compassion for his staff is what sets him apart. After Hurricane Harvey impacted the area, Cunningham provided displaced employees and their families with housing, meals and resources at the hotel along with gift cards to help.

Under his leadership, both Hotel Galvez and The Tremont House have been recognized as “Best of Wyndham Grand” properties. In 2012, he received Wyndham’s General Manager of the Year Award and in 2010,  Hotel Galvez was named Wyndham Hotels’ Hotel of the Year.

“I was both surprised and honored by this award,” says Cunningham. “It is such a privilege to be recognized alongside the other AHLA award winners”.

About Hotel Galvez & Spa®
Hotel Galvez & Spa®, A Wyndham Grand® Hotel, is the only historic beachfront hotel on the Texas Gulf Coast. This 224-room, century-old hotel offers 13,000 square feet of meeting space, a 9,763-square-foot spa, fitness center, full-service restaurant, lobby bar, pool with a swim-up bar and Hall of History. The hotel is rated four diamonds by AAA and is owned by the Cynthia and George Mitchell family as part of Mitchell Historic Properties. For reservations, call (409) 765-7721, or visit www.HotelGalvez.com.

About Wyndham Grand
Travel is the best excuse to enjoy the grand things in life. With locations in some of the world’s most sought after vacation destinations - including Shanghai, Istanbul, Doha, Salzburg and Orlando - Wyndham Grand® hotels transform ordinary moments into unforgettable experiences. Decidedly not stuffy, but approachable by design, this upper-upscale hotel brand helps travelers make every moment count. Follow @WyndhamGrand on Facebook and Instagram.

About Wyndham Hotels & Resorts
Wyndham Hotels & Resorts (NYSE: WH) is the world’s largest hotel franchising company, with nearly 9,000 hotels across more than 80 countries on six continents.  Through its network of more than 792,000 rooms appealing to the everyday traveler, Wyndham commands a leading presence in both the economy and midscale segments of the lodging industry. The Company operates a portfolio of 20 hotel brands, including Super 8®, Days Inn®, Ramada®, Microtel Inn & Suites®, La Quinta®, Wingate®, AmericInn®, Hawthorn Suites®, The Trademark Collection®, and Wyndham®.  Wyndham Hotels & Resorts is also a leading provider of hotel management services, with more than 400 properties under management.  The Company’s award-winning Wyndham Rewards loyalty program offers approximately 58 million enrolled members the opportunity to redeem points at thousands of hotels, condominiums and holiday homes globally.  For more information, visit www.wyndhamhotels.com. 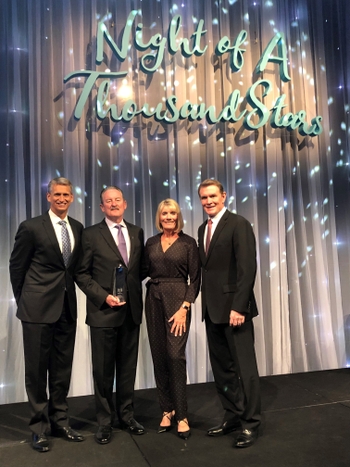