Galveston resident and longtime Hotel Galvez employee Bobby Hilton, 81, will be featured on an episode of Texas Country Reporter scheduled to air on KHOU-TV, Ch. 11 on Saturday, Feb. 21 at 5 p.m. CST. Hilton, guest ambassador for Hotel Galvez & Spa, was interviewed by Texas Country Reporter’s Bob Phillips last fall for the Texas’ based show. His “Service with a Smile” segment includes his personal history and his anecdotes about the hotel.

Hilton has worked at Hotel Galvez & Spa for 24 years including four years in his youth and, most recently as the hotel’s guest ambassador where he acts as a tour guide and resource for information. He is often praised for his charm and storytelling. Guests will also recognize him as a long-time bartender and head waiter.

Hilton was born in Galveston and graduated from Central High School in 1953. He attended Texas Southern University on a football scholarship and later served in the United States Army as a medic and a member of the Army football team. Prior to joining the staff at Hotel Galvez & Spa, he spent 30 years in the beer industry working as a district manager for Galveston’s Falstaff Brewery, Schlitz Brewery and Stroh Brewing Company.

Texas Country Reporter can be seen in every city in Texas as well as nationwide on the cable channel RFD-TV.

The hotel is rated four diamonds by AAA and is owned by the Cynthia and George Mitchell family as part of Mitchell Historic Properties. For reservations, call (800) WYNDHAM, or visit www.HotelGalvez.com. 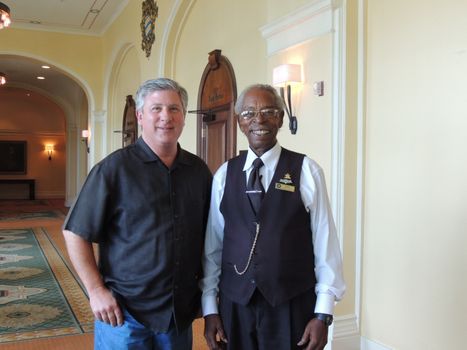 Texas Country Reporter Host and Producer Bob Phillips is pictured with Bobby Hilton, guest ambassador for Hotel Galvez & Spa. Hilton’s interview with Phillips will air on the show on Saturday, Feb. 21 at 5 p.m. on KHOU-TV, Ch. 11.