“Hotel Galvez & Spa is pleased to be part of the Galveston Island Beach Revue,” says General Manager Steve Cunningham. “This event has ties to Galveston’s history so it’s only appropriate for our hotel to be part of it. When you look at old pageant pictures you often see Hotel Galvez in the background. It’s great to honor this tradition.”

The annual event, held the third weekend of May, will once again benefit Galveston’s Family Service Center with a percentage of profits going towards the Island non-profit.

“Beach Central is the perfect location for this event and its continued expansion,” states Islander By Choice co-owner, Will Wright. “With plenty of room for all aspects of the event, from the live music to the Bathing Beauties Contest and our newly added vendors, this new home will allow the Revue to continue its growth and welcome larger audiences.”

For those interested in joining the ranks of Bathing Beauties, registrations for the 2014 contest will open on Saturday, February 1 and are limited to the first 40 accepted applicants. Information on the event can be found at www.galvestonbeachrevue.com.

About the Galveston Island Beach Revue

Dubbed the "Pageant of Pulchritude" by C.E. Barfield, Galveston's Bathing Beauties Contest began in the summer of 1920 and marked the kick-off for tourist season each year. By 1928, the event, which had morphed into the "bathing girl revue" had become so popular, the Island's population was said to have tripled during the event weekend. These Island pageants were the beginning of what we know today as the Miss Universe Pageant. The famed Galveston Bathing Beauties pageants ended in 1932 due in part to the Great Depression and were resurrected in 2009 by Islander By Choice, LLC.

Hotel Galvez & Spa®, A Wyndham Grand® Hotel and National Trust Historic Hotel of America, is the only historic beachfront hotel on the Texas Gulf Coast. This 224-room, century-old hotel offers 13,000 square feet of meeting space, a 9,763-square-foot spa, fitness center, full-service restaurant, lobby bar, pool with a swim-up bar and Hall of History. The hotel is rated four diamonds by AAA and is owned by the Cynthia and George Mitchell family as part of Mitchell Historic Properties. For reservations, call (800) WYNDHAM, or visit www.WyndhamHotelGalvez.com. 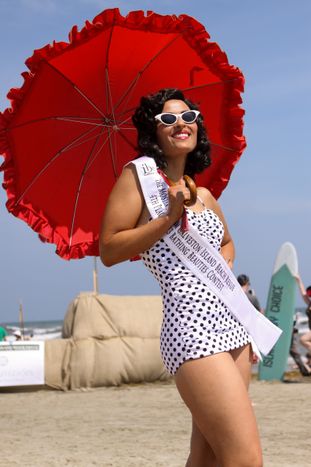 The 2014 Galveston Island Beach Revue is May 16 and 17, 2014.Title Sponsor for the event is Hotel Galvez & Spa. Pictured is Christine White, 4th Place Runner Up, for the 2013 Bathing Beauty Revue.