06/07/2011
Hotel Galvez & Spa, A Wyndham Grand® Hotel, is collaborating with Rosenberg Library’s Galveston and Texas History Center to host a series of exhibits and presentations at the hotel during the months of July, August and September as part of the hotel’s year-long celebration commemorating its centennial.
Rosenberg Library will open a history of tourism exhibit entitled “Spectacular, Spectacular in Galveston Vernacular: A History of Tourism along the Galveston Beachfront” on Wednesday, July 6. This display, which runs through Sunday, July 31, will offer rarely seen photos, postcards, drawings, maps and ephemera of Galveston’s early bathhouses, hotels, amusement parks and dance halls. The exhibit, free and open to the public, will begin in the hotel lobby and continue in the hotel’s Hall of History, which is located in the lower level of the hotel.
“We’ve found that early visitors chose Galveston because of its beach and climate, which is why people still continue to visit,” says Casey Greene, head of Special Collections of Rosenberg Library’s Galveston and Texas History Center. “These exhibits will allow visitors to step back in history and enjoy the Galveston of the past.”
The panel exhibit will be on display beginning Wednesday, July 6 through Sunday, July 31. UPDATE: This exhibit has been extended through September.
The Texas History Center of Rosenberg Library is widely known for its extensive collection of historic postcards and photographs. Beginning Monday, Aug. 1 through Wednesday, Aug. 31, Rosenberg Library will present “Queen of the Gulf: Hotel Galvez in Postcards.” This visual presentation, to be shown in Hotel Galvez’s Hall of History, will rotate through more than 50 historic postcards of the hotel spanning every decade.
Rosenberg Library will also present “Back in the Day: Galveston in 1911” beginning on Thursday, Sept. 1 through Thursday, Sept. 30 in the hotel’s Hall of History. Visitors will see historic images of area attractions such as Murdoch’s, Hotel Galvez, The Casino (midway), The Interurban Train and the Seawall, which was dedicated in 1911.
About Rosenberg Library
Rosenberg Library has offered over a century of community service to the Galveston area. The building itself was dedicated on June 22, 1904, the birthday of its patron, Henry Rosenberg.  The Moody Memorial Wing opened in 1971, more than doubling the floor space and allowing for a children's library, a history center, several galleries to showcase museum collections, and later, a computer lab. The library has just completed extensive renovations of the historic Rosenberg Wing interior.
About Hotel Galvez Hall of History
The Hall of History, which opened in January 2011, is a permanent informational display about the hotel’s history, famous guests and includes a visual slideshow of 200 images. The exhibit, free and open to the public, features various items displayed in two cases purchased from the original Eiband’s Department Store. Many of these items were donated by former guests and hotel staff members from across the country while others are part of the hotel’s collection. Hotel Galvez collaborated with the Galveston County Historical Museum on this exhibit. The public is invited to donate relevant items to the exhibit.
Exhibit Schedule
UPDATE: July 6 - Sept. 30, Spectacular, Spectacular in Galveston Vernacular:  A History of Tourism along the Galveston Beachfront, 1881-1943
Aug. 1 – Aug. 31, Queen of the Gulf: Hotel Galvez in Postcards
Sept. 1 – 30, Back in the Day: Galveston in 1911
The Hotel Galvez & Spa, A WyndhamGrand® Hotel and National Trust Historic Hotel of America, is the only historic beachfront hotel on the Texas Gulf Coast. The Hotel Galvez, rated four diamonds by AAA, is owned by Galveston preservationist George Mitchell and is part of Mitchell Historic Properties. For reservations, call (800) WYNDHAM -- (800) 996-3426 -- or visit www.WyndhamHotelGalvez.com.
Wyndham Hotels and Resorts, LLC, a subsidiary of Wyndham Worldwide Corporation (NYSE: WYN), offers upscale hotel and resort accommodations throughout the United States, Europe, Canada, Mexico, China and the Caribbean. All Wyndham® hotels are either franchised by the company or managed by Wyndham Hotel Management, Inc., one of its affiliates or through a joint-venture partner. Additional information and reservations for all Wyndham hotels are available by calling (800) WYNDHAM – (800) 996-3426 – or visiting www.wyndham.com. 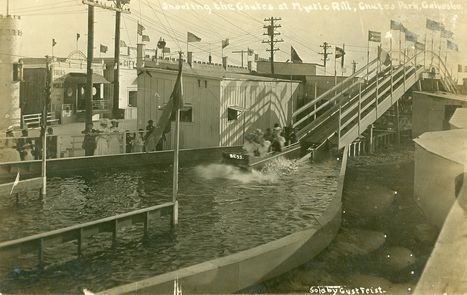 During 1907, Chutes Park joined Electric Park in fullfilling Galveston's wishes to be the "Coney Island of the South."
Electric Park
View | Download 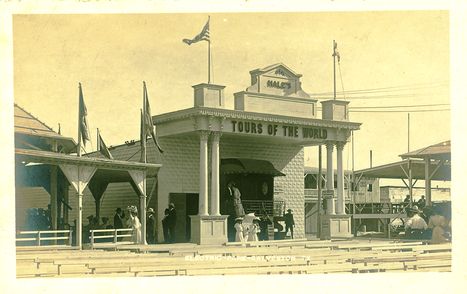 In October 1904, William Gardner made a high priority of bringing beach attractions to Galveston to induce visitors to stay overnight. Electric Park was opened in May 1906 to fit the bill.