11/17/2011
On behalf of Chief Executive Officer George Mitchell, Mitchell Historic Properties (MHP) has expressed interest to the City of Galveston on purchasing the Pier 19 Chanel front, piers and 20 through 22 to continue future development. MHP staff spoke at a City Council workshop on Nov. 14, 2011 on this issue. MHP currently has a long-term lease with the Port of Galveston which expires in 2065. George Mitchell began developing Piers 20 – 21 in the early 1990s and has invested over $12 million in this area. If the purchase is approved by voters, Mitchell has a future vision to invest another $25 million in additions and improvements toward the proposed visionary plan.
Background History/Cruise Ship Support
One of the earliest proponents of an effort to attract cruise ships to Galveston, George Mitchell spearheaded and underwrote numerous initiatives
Purchase of Piers 19-22
The Mitchell purchase of 16 acres of land between Piers 19-22, would include:
Future Plans
All future plans will maintain the Port’s infrastructure as is, including the Port’s use of Lay Berthing, railroad operations and street ROW. In addition to the $12 million already invested by Mitchell in the development, $25 million will be committed to the proposed plan, including these additions and improvements. Mitchell is not interested in purchasing any part of Pier 19 which includes the Mosquito Fleet, charter fishing boats, retail fish and fresh seafood outlet or Joe’s Crab Shack.
Potential plans could include:
Security
There will be no change to existing security.
Economic Impact of Development
The current development plan has only positive economic effects
Current Financial Plan
In the present operation, Mitchell Historic Properties breaks even or loses money. The company pays 2.5% of gross revenue receipts from all Pier 21 income to the Port, which amounts to approximately $300,000 each year.
Potential Barriers to the Success of the Development Plan
About Mitchell Historic Properties
Mitchell Historic Properties (MHP) oversees Galveston properties owned by developer, philanthropist and preservationist George Mitchell and the Mitchell family, including its commercial and residential properties located downtown as well as three hotels – Hotel Galvez & Spa, The Tremont House and Harbor House Hotel and Marina. MHP owns and preserves approximately one-fourth of the buildings in The Historic Strand Seaport Area. For leasing information, visit www.MitchellHistoricProperties.com or call (409) 763-5806. 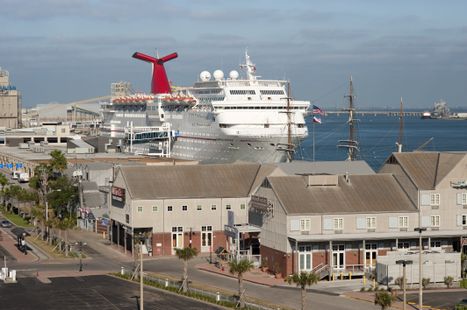 Due to high demand for waterfront property for dining, retail and entertainment, the Pier 21 complex provides a destination along the pier. Pier 21 offers retail space.