What's New at Mitchell Historic Properties and in Galveston

03/22/2012
Preservation Efforts
Mitchell Historic Properties purchases 1859 Hendley Building
George Mitchell and the Mitchell family recently added another historic Galveston building to their Mitchell Historic Properties (MHP) portfolio with the purchase of the 1859 Hendley Building. MHP recently closed on the sale of the two east bays of Hendley Row located on the northwest corner of 20th and Strand. For many years this portion of the building housed Demack & Co., a produce wholesaler that closed in 1999. This part of the building does not include long-time shop Hendley Market. MHP plans to renovate the building and create retail space on the first floor.
Mitchell Historic Properties repairs cast iron on 1871 Thomas Jefferson League Building
Mitchell Historic Properties (MHP) is currently completing the third major restoration of the 1871 Thomas Jefferson League building since the Mitchells took ownership in 1976. The League Building was the first of more than 20 historic buildings purchased by the Mitchells in what was later to become The Strand National Historic Landmark District.
The original restoration of the League building in 1979 started a renaissance of Galveston’s downtown area and led to further investment by the Mitchell family and other individuals and entities. According to the National Trust for Historic Preservation, Galveston has one of the largest collections of cast-iron commercial buildings in the United States.
Galveston Island
Galveston Island is approaching five-year anniversary of Hurricane Ike
On September 13, 2008, Galveston Island was struck by Hurricane Ike. Hurricane Ike made landfall at 2:10 a.m. with a 17-20 foot storm surge and 110 mph winds, flooding 75 percent of Galveston Island. It is the third most destructive hurricane to ever make landfall in the U.S. An estimated $3.2 billion worth of damage was caused on the Island alone. As Galveston approaches its five-year anniversary in 2013, all tourism related businesses have reopened with the exception of one museum. All hotels have reopened and the Flagship Hotel, which was torn down, is being redeveloped as the Galveston Island Historic Pleasure Pier which is opening in May 2012. Recently, two new attractions – Haunted Mayfield Manor and Pirates! Legends of the Gulf Coast opened in downtown Galveston. Galveston has weathered many hurricanes over the years, including the deadliest natural disaster in United States history – the 1900 Storm, but the island’s resilience keeps it strong.
Galveston Island Historic Pleasure Pier is opening just four blocks from Hotel Galvez
The new Galveston Island Historic Pleasure Pier is scheduled to open Memorial Day Weekend. The $60 million attraction will offer 16 rides, including a vertical-lift steel coaster, a 100-foot-tall Ferris wheel with programmable LED lights and a 200-foot-tall swing tower offering panoramic views of the Gulf of Mexico. The Galveston Island Historic Pleasure Pier is just four blocks from Hotel Galvez and a mile from The Tremont House. The hotels offer a courtesy shuttle to transport guests on busy weekends between properties (Hotel Galvez, The Tremont House and Harbor House Hotel and Marina).
New Tanger Factory Outlets Center to open just 15 minutes from Galveston
A new Tanger Factory Outlet Center is scheduled to open on Interstate-45 in October 2012. The new Tanger Outlet location is just a fifteen minutes from Galveston. This 90-store upscale outlet will offer a Banana Republic, Brooks Brothers, Polo Ralph Lauren, Calvin Klein, and Puma. Other retailers include Guess, Nine West, Perry Ellis, Tommy Hilfiger, Gap Factory, and Under Armour. The new outlet will compliment the variety of shopping available in historic downtown Galveston.
Frequent festivals and free events attract visitors to downtown
The calendar of events for downtown Galveston is filled with festivals and free monthly events to entertain visitors. Annual festivities include the Yaga’s Chili Quest and Beer Fest (January), Mardi Gras! Galveston (February), Galveston Island Food and Wine Festival (April), and the Galveston Island Shrimp Festival (September). These festivals compliment the free monthly events, scheduled in March through October, that include Movie Nite (first Saturdays), Music Nite (second Saturdays) which will include some theme nights and Market on The Strand (third Saturdays, March through December). Downtown is also host to Santa on The Strand on Saturdays in December. This year’s movie schedule features The Karate Kid (March 3), The Sting (April 7), The Blind Side (May 5), Ghostbusters (June 2), Julie and Julia (July 7), King Kong (Aug. 4), The Pink Panther (Sept. 1), Rear Window (Oct. 6).
New attractions and new documentary add to experience of downtown Galveston
With the addition of Haunted Mayfield Manor and Pirates! Legends of the Gulf Coast, downtown Galveston now offers eight attractions including two harbor tours, three museums and three movies at Pier 21 Theater. Haunted Mayfield Manor is a year-round haunted house themed around a fictional Dr. Mayfield and the 1900 Storm. Pirates! Legends of the Gulf Coast is a family friendly attraction that addresses the fact and fiction of pirates. Both attractions, which are located off Saengerfest Park at 23rd and Strand, feature characters portrayed by actors who interact with guests. Pier 21 Theater now airs a 57-minute documentary called “Galveston – Gateway on the Gulf” at 10 a.m. and 4 p.m. daily. This documentary tells the story of the more than 200,000 immigrants who entered the United States through Galveston between 1835 and 1935. It will pair well with “Forgotten Gateway: Coming to America through Galveston Island,” an exhibit that chronicles the Port of Galveston’s immigration history. Forgotten Gateway is scheduled to come to the Texas Seaport Museum later this year. Pier 21 Theater also airs “The Great Storm” and “The Pirate Island of Jean Laffite.” 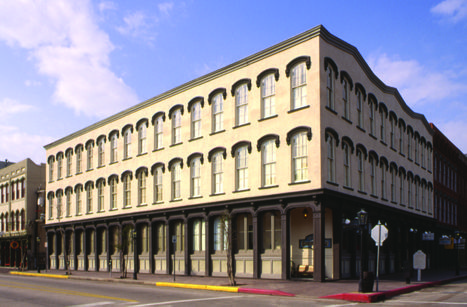 The Thomas Jefferson League Building, built in 1871, was the first building purchased by the Mitchells in 1976. The League Building is located on the corner of 23rd Street and Strand in a high-traffic location. The building includes restaurant space and office space on the upper levels.
Mural at Pirates! Legends of the Gulf Coast
View | Download 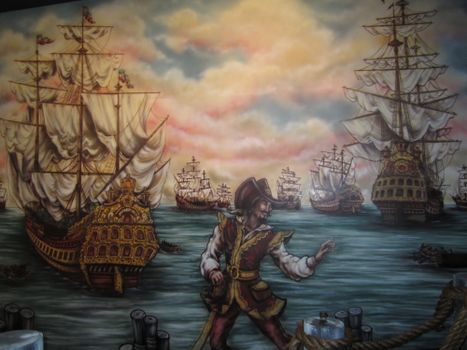 Mural at Pirates! Legends of the Gulf Coast

Pirates! Legends of the Gulf Coast is Galveston's newest family attraction located in downtown Galveston. Pirates! will open to the public on Friday, Jan. 27, 2012.