A Free Summer of Fun in Downtown Galveston Island

As the weather warms up, Galveston Island becomes home to a number of amazing, free events.  Visitors and residents are invited to enjoy free movies and live concerts throughout the historic downtown.

This April, Movie Nite on The Strand starts the season off right for locals and visitors.  Movies begin just after dusk at Saengerfest Park, 2302 Strand.  Moviegoers are encouraged to stop for a bite to eat at a wide variety of downtown restaurants before setting up a blanket or chair for a free movie under the stars.

Beginning in March, music enthusiasts looking for a great live music scene will enjoy Music Nite on The Strand which is scheduled on the second and fourth Saturdays of the month.  A dance floor and limited seating are provided so crowds can dance to the beat and rest between songs.  Bands perform at Saengerfest Park, 2302 Strand, from 6 to 9 p.m.  Visitors are encouraged to bring their own seating.

May 10 – Sam Navarro and the Lone Star Devils (country)

Movie Nite and Music Nite are sponsored by Mitchell Historic Properties and the Galveston Park Board of Trustees.

Mitchell Historic Properties oversees Galveston properties owned by George Mitchell and the Mitchell family, including three hotels, The Hotel Galvez & Spa, The Tremont House, and Harbor House, as well as commercial and residential properties located downtown and at Pier 21 along Galveston’s historic harbor.  The Mitchell’s ongoing preservation of Galveston’s historic downtown helps spark the resurrection of The Strand National Historic Landmark District and Pier 21 as a tourist destination.  For leasing information, visit www.MitchellHistoricProperties.com or call (409) 763-5806. 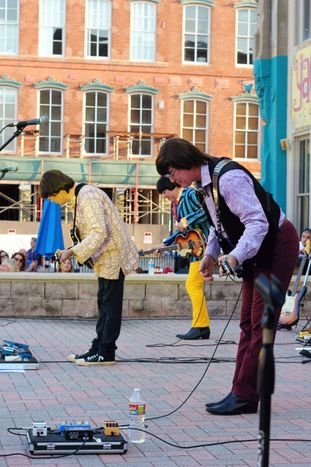 The Beatles tribute band, The Fab 5, perfoming at Saengerfest Park during Music Nite in the Strand.