Exhibit on Texas’ First Interstate and its Spanish and Mexican Ties to Texas Aug. 27 – Sept. 5

07/18/2011
Did you know that in 1836, Texans used a route named El Camino Real de los Tejas (The Royal Road of Texas) to flee from Santa Anna in the Runaway Scrape? A free public exhibit that explores Spain’s and Mexico’s involvement with Texas and its connection to this 2,500-mile historic trail will be on display Saturday, Aug. 27 through Monday, Sept. 5 (Labor Day) in Old Galveston Square, 2211 Strand. “El Camino Real de los Tejas: Past & Present,” created by the Consulate General of Spain in Houston, features panels with old maps and engraving reproductions, photographs and other historical documents. The trail is one of eleven designated historic trails in the country.
The Spanish Consulate exhibition will be accompanied by “Photographs of El Camino Real de los Tejas” by Photographer Christopher Talbot, an associate professor at the Stephen F. Austin University School of Art. This photography exhibit features a portion of Talbot’s traveling exhibit which is going to various sites along the historic trail and is a visual documentation of Camino Real. His photos have captured outstanding images of trail swales, acequias, river crossings, forts, missions, presidios, and other original remnants along the old route.
The display will open in conjunction with ArtWalk on Saturday, Aug. 27 from 6 to 9 p.m. Following ArtWalk, it will be open daily from Sunday, Aug. 28 through Monday, Sept. 5 from 2 to 6 p.m. A seminar about El Camino Real de los Tejas will be held on Friday, Sept. 2 from 6:30 to 8 p.m. Several experts will talk about the significance of the route and answer questions from the public. Speakers include Dr. Felix Almarez, University of Texas San Antonio; Steven Gonzales, El Camino Real do los Tejas National Historic Trail Association; and Florence Patton, Daughters of the American Revolution. The event will also be attended by the new Spanish Consul General Cristobal Valdés Valentin-Gamazo.
El Camino Real de los Tejas National Historic Trail was designated by the U.S. Congress in 2004 to commemorate significant historic routes extending from the international border at the Rio Grande to the easternmost section of the Spanish province of Texas in Natchitoches Parish, La.
The trail long pre-dates the establishment of the United States, in the 1680s when the Spanish began to travel regularly into Texas and western Louisiana; they followed already existing American Indian trails. The Spanish used these paths to reach established missions and presidios. Later armies and immigrants followed these routes, which led to Euro-American settlements across two states. Many of these roads continued to be used and became part of the modern highway systems. In many places, the Spanish names for the roads and landscape are still in use.
The exhibit is sponsored by Mitchell Historic Properties, Repsol, BBVA- Compass Bank and the Fundación Rafael del Pino. Also supporting the event are Galveston Historical Foundation, Texas Parks and Wildlife Department, El Camino Real de los Tejas National Historic Trail Association, Daughters of the American Revolution, Stephen F. Austin State University Professor Christopher Talbot and the Consulate General of Mexico.
For more information about the exhibit, contact: consulatespain@comcast.net. The exhibit was brought to Galveston by Mitchell Historic Properties (MHP). MHP oversees properties owned by George Mitchell and the Mitchell family. For commercial and residential leasing information, visit www.mitchellhistoricproperties.com or call (409) 763-5806. 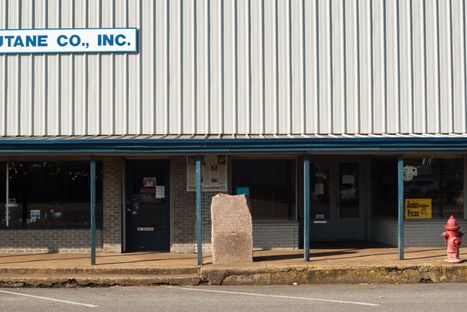 In the early 20th Century, the Daughers of the American Revolution lobbied the state of Texas to have the route of El Camino Real de los Tejas recognized and commemorated. Pictured is one of the markers.
Mission San Antonio de Valero (The Alamo)
View | Download 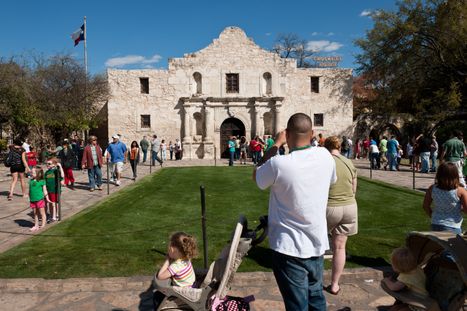 The Alamo in San Antonio is on the route of El Camino Real de los Tejas. This mission is the final site of Mission San Antonio de Valero and the site of the Battle of the Alamo.