07/14/2011
Jewelry, ghosts and pirates are coming to historic downtown Galveston. The Jewel Garden, and two new attractions - Haunted Mayfield Manor and Pirates! Legends of the Gulf Coast - are leasing newly renovated space from Mitchell Historic Properties in the historic Strand District.
The Jewel Garden, 2326 Strand, opened in July and is owned by the Yeatman family. As the name reflects, the store offers a broad range of jewelry including sterling silver with amber and turquoise accents, rhodium jewelry by several designers, Angie Olami “roman glass” jewelry, and Desert Heart handmade jewelry from Alpine, TX. Rhodium jewelry is a popular choice for shoppers because it is nickel and lead-free, hypoallergenic and doesn’t tarnish. The shop is the exclusive retailer for Ayala Bar, which is designed by an Israeli artist who uses vintage fabrics and Swarovski crystals for this handmade jewelry. The Jewel Garden is also one of only seven stores in Texas to carry Holly Yashi jewelry from California. In addition to jewelry, The Jewel Garden offers an array of gift items and décor such as metal wall art, Cloisonné ornaments, pet-themed planters and unique wine caddies. The Yeatmans also operate Santa Fe Trails, 2311 Strand, which specializes in Native American and Southwest jewelry and art.
Joyce McLean, owner of Head to Footsies, 2211 Strand, is opening Haunted Mayfield Manor in late August in the Butterowe Building, adjacent to Saengerfest Park (23rd and Strand). This fourteen-room haunted mansion is themed around the fictional Dr. Mayfield who supervised the operation of one of the morgues following the 1900 Storm. While the character is fictional, thousands of bodies were stored for identification in various downtown buildings including the 1885 Butterowe Building. McLean describes the experience as a “psychological haunt that involves the lost bride of Dr. Mayfield portrayed by actors, mechanical props and pneumatic animations.” The cost for regular admission will be $10. When Pirates! Legends of the Gulf Coast opens in early October, a combination ticket will be offered for both attractions for $16.99.
Pirates! Legends of the Gulf Coast will be a pirate-themed attraction featuring the deck of a pirate ship and captain’s cabin with a focus on the notorious Jean Lafitte and his brother Pierre, as well as Jane Long. Long is known as “The Mother of Texas” and was a resident of Bolivar Peninsula while Lafitte occupied Galveston. “Visitors will explore the myths and legends of these icons of history in a fact-based interactive fun experience,” says McLean. After Lafitte was ejected from Louisiana, he made Galveston his base of operations from 1817 to 1821. He allegedly built a bright red mansion called the “Maison Rouge,” which could be seen from miles out at sea. Lafitte burned the Maison Rouge and his entire Campeche encampment when he was ordered to vacate island by the United States Navy. The attractions will offer a gift shop with pirate and ghost themed books, costumes, toys and games as well as paranormal equipment. Pirates! will be located next door to the Haunted Mayfield Manor.
“These new family friendly attractions are a perfect fit to downtown Galveston,” says Bill Ross, senior vice-president and general manager of Mitchell Historic Properties. “These activities will enhance the downtown Galveston experience and complement the existing retail and dining options.”
Mitchell Historic Properties oversees Galveston properties owned by Cynthia and George Mitchell and the Mitchell family, including its commercial and residential properties located downtown. For leasing information, visit www.MitchellHistoricProperties.com or call (409) 763-5806. 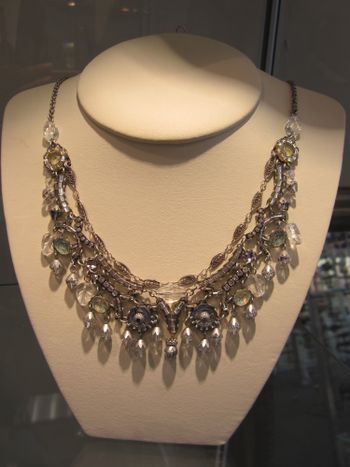 Ayala Bar Necklace on display at The Jewel Garden

The Jewel Garden, 2326 Strand, is the exclusive retailer for Ayala Bar, which is designed by an Israeli artist who uses vintage fabrics and Swarovski crystals for this handmade jewelry.
Jewelry on Display at The Jewel Garden
View | Download 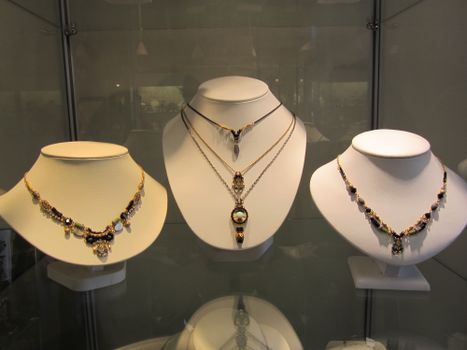 Jewelry on Display at The Jewel Garden

The Jewel Garden is the exclusive retailer for Ayala Bar, which is designed by an Israeli artist who uses vintage fabrics and Swarovski crystals for this handmade jewelry.
Wine Caddies Available at The Jewel Garden
View | Download 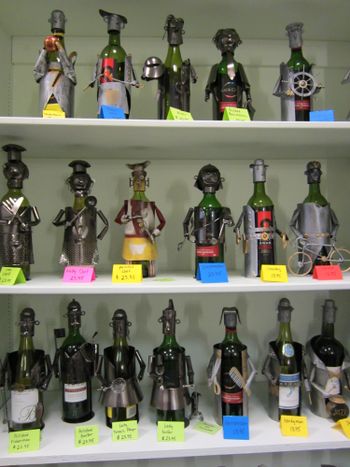