GALVESTON, Texas (February 6, 2017) – The Hendley Building will be recognized by Preservation Texas at their 2017 Honor Awards Ceremony and Reception in Waco, Texas on February 27, 2017. The recipients of this award are recognized for successful efforts to save irreplaceable and authentic endangered historic places in Texas.

“It is an honor to be recognized by Preservation Texas this year for Mitchell Historic Properties’ and the Mitchell family’s efforts,” said Joseph Rozier, General Manager of Real Estate Operations at Mitchell Historic Properties, Inc. “It was Mr. Mitchell’s vision to revitalize the east end of the Strand Historic District by saving the eastern buildings of Hendley Row.  We are one step closer to that vision.”  Rozier recalls, “Once word got out that Mr. Mitchell was purchasing the Hendley Buildings in 2012, after a decade of negotiations, we saw new signs of development east of 20th Street.  New businesses were going into vacant buildings on the east end of the Strand, and now you see two major rehabilitation projects underway on 20th at Strand & Mechanic Streets.”

The 2017 Honor Awards will be presented at the Grand Lodge of Texas in Waco, followed by a reception. The event also headlines the 2017 Preservation Texas Summit, both the Honor Awards and the Summit are open to the public. Tickets may be purchased through Preservation Texas at www.PreservationTexas.org/Waco.  Hendley Row is located on the corner of 20th and Strand and is the oldest surviving commercial structure in Galveston.

Mitchell Historic Properties oversees the Galveston properties owned by the Cynthia and George Mitchell family, including three hotels, The Hotel Galvez & Spa, The Tremont House, and Harbor House Hotel & Marina, as well as, commercial and residential properties located downtown and at Pier 21® along Galveston’s historic harbor.  The Mitchell’s ongoing preservation of Galveston’s historic downtown helped spark the resurrection of The Strand National Historic Landmark District and Pier 21® as a tourist destination. For leasing information, visit www.MitchellHistoricProperties.com or call (409) 761-4110. 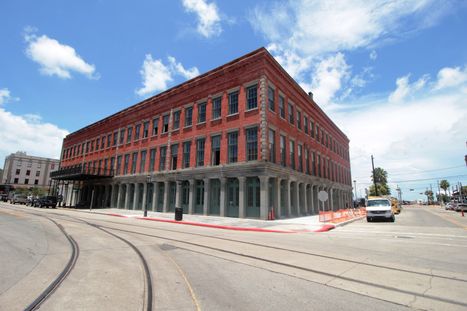 Hendley Row located on the corner 20th and Strand

Hendley Row located on the corner 20th and Strand