10/13/2011
Playing off the fears of others is not only entertaining for some but for Leonard Pickle it’s his career.
In his sophomore year of college at Texas A & M University Leonard produced his first commercial haunted house. With a budget of $300 and a $0.50 per person admission price, the operation grossed over $1,000. His passion for scaring people was ignited. Leonard has become one of the most sought after Haunt designers and consultants in the country having designed over 100 original and creative Haunted Attraction designs for major venues including Madison Square Garden, Universal Studios Florida, Six Flags, Paramount’s Kings Island, Kentucky Kingdom, and SCREAMS Terror Park. Over 1 million people from Los Angeles to New York, Orlando to Seattle, have experienced the “Pickel Theory of Fright” firsthand. Pickel also designed and oversaw the construction of Haunted Mayfield Manor which recently opened on the Strand in Galveston, Texas. Haunted Mayfield Manor is a year-round haunted house.
Pickel is a featured guest on the legendary Martha Stewart Halloween Special which will air Oct. 24 on the Hallmark Channel (*check your local listings for times). He is known as the ‘Godfather of the Haunted House Industry’ and is owner of Hauntrepreneurs® a design and consulting firm, has taken great pleasure in horrifying crowds from coast to coast for over thirty years.
Each year Pickel travels the world researching the field of dark amusements both past and present. Leonard applied his expertise toward a summer seasonal haunted house in 1993, with Mayhem Manor® in Myrtle Beach, South Carolina, which provided Pickel a hands-on testing facility for new fright concepts. In 1994, Leonard co-founded Haunted Attraction Magazine, the premier publication for the dark amusement industry, striving to provide information vital to the success of the industry, with in-depth articles on the country’s major attractions. In 2004, Leonard launched the Haunted Attraction National Tradeshow and Convention the first national convention devoted solely to the Haunted Attraction Industry, designed for Haunters by Haunters.
Pickle is an accomplished speaker and is often asked to present his seminar “Getting Started in the Haunted Attraction Industry,” a full day workshop covering the ins and outs of operating your first Haunted Attraction. He was awarded a life time achievement award from the International Association of Haunted Attractions and was honored with a question using his name in the Millennium Edition of Trivial Pursuit. He was also appeared as an industry expert in several television programs including the Travel Channel special about Halloween Horror Nights at Universal Studios Florida, and America’s Best Haunted Houses.
Haunted Mayfield Manor in Galveston is a tenant of Mitchell Historic Properties. For more information on Haunted Mayfield Manor, visit www.HauntedMayfieldManor.com or call (409) 762-6677.
Contact: Leonard Pickel
Tel. 972-951-5100
Email: leonardpickel@gmail.com
Web: www.leonardpickel.com 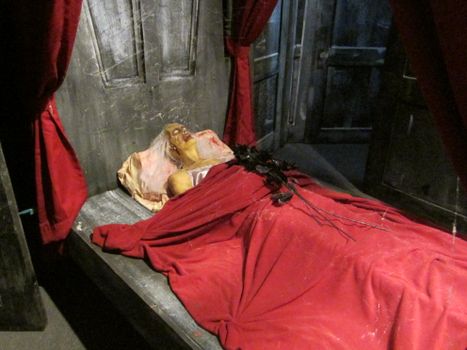 Haunted Mayfield Manor features a variety of mechanical props and pneumatic animations throughout the 12-room mansion. The year-round haunted house was designed by Leonard Pickel.