George Mitchell and His Contributions to the Revival of Mardi Gras

01/25/2012
Background Provided by Dancie Ware, Dancie Perugini Ware Public Relations
Annually, in the two weeks before Lent, thousands of revelers are drawn to the resplendent pageantry of Mardi Gras! Galveston. Texas’ largest and most acclaimed Mardi Gras celebration - replete with sparkling parades and headliner entertainment, grand galas and artwalks, and unbridled energy spawned by more than 50 events - Mardi Gras transcends social, commercial, and tourism significance by unifying people of all ages and ethnicities.  While today’s Mardi Gras is facilitated by the City of Galveston and produced by more than a dozen participating krewes, the essence and historical rebirth of Mardi Gras belongs to one man, George P. Mitchell.
In 1985, Mitchell, a native Galvestonian, desired to regain the Island’s ‘Golden Age of Mardi Gras’ with the same krewes, pageants, and parades he experienced as a young boy. He and his wife, Cynthia, envisioned a Mardi Gras renaissance that advanced the arts, culture, community, and tourism, while honoring the tradition’s historical precedent set more than a century ago. Their timing was impeccable. Cynthia suggested underwriting a Mardi Gras revival as the ideal grand opening for their newly restored Tremont House Hotel. George and Cynthia enlisted fifth-generation Galvestonian Dancie Perugini Ware to the team, and together they redefined the ‘Golden Age of Mardi Gras.’ Ignited by the Mitchell’s vision for a grand-scale artistic, alluring cultural event, Ware researched and produced an international theme for each year, creating an international art-exchange network and central focus from which magical Mardi Gras memories were born. The famed seven ceremonial Mardi Gras arches, catching the attention of The New York Times, The Smithsonian’s National Museum of Design; the Cooper-Hewitt Museum in New York; the world’s largest piñata, making the Guinness Book of World Records; Hollywood fashion designer and “Master of Hollywood Glamour,” Bob Mackie, serving as Parade Marshall; Miralda’s International Honeymoon Project; the stunning fireworks display from the same pyro technician who created the Eiffel Tower’s millennium celebration; and of course, the Philadelphia Mummers - all extraordinary creative endeavors by the Mitchells and Ware that secured Mardi Gras’ stature, an assurance from the revival’s first year, ‘The Age of Mythology.’
Nine dazzling floats, gigantic heads of Greek gods, created by renowned New Orleans float-builder, Blaine Kern, and hundreds of musicians, led by famed jazz artist, Pete Fountain, paraded through The Strand in 1985 as 75,000 partygoers spilled into the streets. The sight was electrifying and the Mitchell’s vision of Mardi Gras was revived. Nineteen-eighty-five also marked the resurrection of the 1871 Mardi Gras society krewe, the Knights of Momus, a Mitchell collaboration with a handful of prominent Galvestonians, whose generosity and commitment made ‘The Age of Mythology’ a triumph rebirth. The Knights of Momus remains Galveston’s grandest krewe and the inspiration for all subsequent krewes that will carry the Mitchell legacy of ‘The Golden Age of Mardi Gras’ into perpetuity. 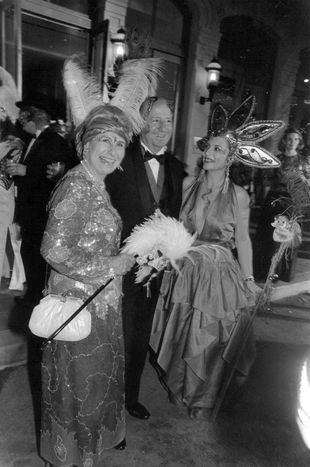