10/06/2009
The Tremont House is pleased to host its 26th Annual Mardi Gras Ball, A Celebration of the Chinese New Year, as part of Mardi Gras! Galveston 2010.  A portion of the proceeds from the ball will benefit Rosenberg Library, a direct descendant of Texas’ first public library, which is still recovering from damage sustained from Hurricane Ike.  The annual ball, hosted by owners Cynthia and George Mitchell and the Mitchell family, originated in 1985 with the grand opening of The Tremont House and the revival of Galveston Island’s city-wide Mardi Gras celebrations.  Ball tickets are $350 per couple an include an open bar, extensive buffet featuring Asian cuisine, a dance band in the lobby, a jazz quartet in the dining area, a prime location for parade viewing and a variety of entertainment at the after party in the hotel’s ballroom, including Chinese culture dancers.  Breakfast is served at the conclusion of the evening.  The Tremont House is offering a two-night package that includes accommodations, two tickets to the ball on Saturday, Feb l3, 2010 and parade viewing of the Momus Grand Night Parade.  The package price is for Feb. 12-14, 2010 and starts at $1,100.
The Tremont House, a Wyndham Grand Hotel and National Trust Historic Hotel of America, is part of Mitchell Historic Properties.  For Mardi Gras ball reservations, all (409) 763-0300 or e-mail mgreservations@wyndham.com 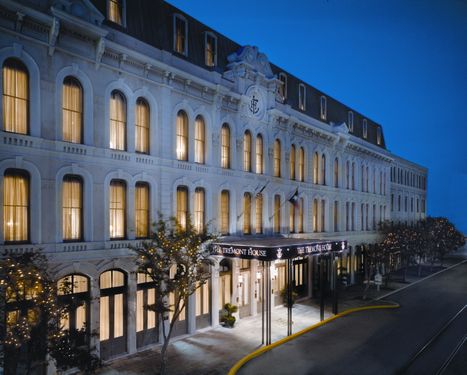 The Tremont House is located in the 1879 Leon & H Blum Building in the heart of historic downtown Galveston.