Purple, green, and gold as well as a touch of maroon will highlight Mardi Gras at The Tremont House during the second annual A&M Mardi Gras Parade Viewing Party benefitting the George P. Mitchell Society of Texas A&M University at Galveston. The parade viewing party, underwritten by The Tremont House, A Wyndham Grand® Hotel, is set for Saturday, Feb. 6, 2016 beginning at 5:30 p.m. in The Tremont Ballroom.

“Texas A&M University at Galveston is thankful for the generous support of The Tremont House and the opportunity to partner with them in the production of this event for the benefit of the George P. Mitchell Society and, ultimately, the students of Texas A&M University at Galveston through the addition of scholarships and campus Excellence Initiatives.” says Admiral Robert Smith III, CEO of TAMUG.

The A&M Mardi Gras Parade Viewing Party will take place entirely in the Tremont Ballroom and offer dinner, open bar, live music and a premier view of the Momus Grand Night Parade as it passes in front of the hotel. Guests will have the option to watch the parade from the ballroom balcony or on the street level in a gated viewing area. Tickets are $175 per person or $2,500 for a table of ten. To reserve tickets or a table, visit www.tamug.edu/mardigras.

“We are proud to continue this new tradition of Mardi Gras at The Tremont House through our partnership with Texas A&M University at Galveston,” says Complex General Manager Steve Cunningham. “Mr. Mitchell loved Texas A&M University and he would be pleased that during Mardi Gras our ballroom is filled with Aggies and supporters of his prized alma mater.”

About the George P. Mitchell Society

The Tremont House, A Wyndham Grand® Hotel, is owned by the Cynthia and George Mitchell family as part of Mitchell Historic Properties. The Tremont House is a 119-room boutique style hotel located in the heart of The Strand National Historic Landmark District and Galveston’s Downtown Cultural Arts District. The hotel is in the heart of the Mardi Gas Uptown Entertainment district and features 14,000 sq. ft. of meeting space, a bistro-style café, fitness center and two bars for entertainment – the 1888 Toujouse Bar and The Rooftop Bar. For reservations, call (409) 763-0300 or visit www.TheTremontHouse.com.

Part of Wyndham Hotel Group, Wyndham Hotels and Resorts, LLC, offers upscale hotel and resort accommodations at more than 200 properties throughout the United States, Canada, Mexico, Central and South America, the Caribbean, Europe, the Middle East and China. Most Wyndham® hotels are franchised by Wyndham Hotels and Resorts, LLC or its affiliate. Certain Wyndham hotels are owned or managed by an affiliate of Wyndham Hotel Group, LLC. Additional information and reservations for all Wyndham hotels are available by visiting www.wyndham.com. Travelers have the opportunity to earn and redeem points through Wyndham Rewards®, the brand’s guest loyalty program, which can be joined for free at www.wyndhamrewards.com.

Wyndham Grand® Hotels and Resorts are an ensemble of distinguished hotels within the Wyndham Hotels and Resorts® brand that represent one-of-a-kind experiences in key destinations with refined accommodation, attentive service and relaxed surroundings.

Wyndham Hotel Group is the world’s largest hotel company based on number of hotels, encompassing approximately 7,760 properties and 672,000 rooms in 71 countries. Additional information is available at www.wyndhamworldwide.com. For more information about hotel franchising opportunities visit www.whgdevelopment.com.

Mardi Gras, the traditional festival of feasting and merrymaking that precedes the season of Lent, was first publicly observed on Galveston Island in 1867. Following a sabbatical imposed in 1941 by war and challenging times, Mardi Gras! Galveston was revived in 1985 by Galveston-born preservationist and developer George P. Mitchell. The largest celebration of its kind in Texas and the third largest in the nation, Mardi Gras! Galveston brings the island’s streets to life with parade viewers shouting for beads, lively tunes played by the colorful marching bands, and the infectious merriment that dominates the island for two full weeks. For details, visit http://www.mardigrasgalveston.com​

Galveston Island is a historic beach town located on the Gulf of Mexico just 50 miles from Houston. The island offers 32 miles of beaches, a variety of family attractions, one of the largest and well-preserved concentrations of Victorian architecture in the country, and Texas’ premier cruise port. For more information on Galveston Island visit www.galveston.com or call 1-888-GAL-ISLE. 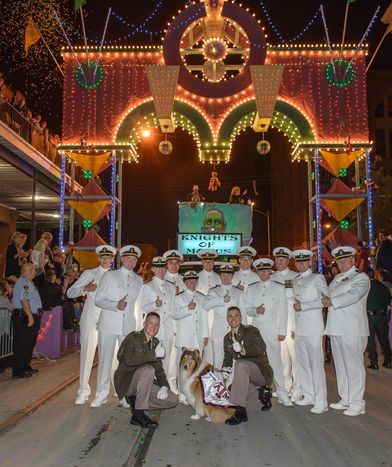