The sounds of  jazz and swing will fill The Tremont House, A Wyndham Grand® Hotel, during its 30th Annual Mardi Gras Ball & Parade Viewing Party on March 1, 2014. The Tremont House invites guests and community members to  its “Pearls and Prohibition” celebration, where artful décor --coupled with music by retro-swing band Poppin’ Daddies, jazz vocalist Danielle Reich and the renowned Dr. Michael White Jazz Quartet -- will transport revelers back to Galveston’s glory days of great music, speakeasies and glamour.

As guests arrive, they will be greeted with hors d’oeuvres and Prohibition Era-inspired cocktails accompanied by one of Austin’s top jazz and swing singers Danielle Reich. Reich, whose debut album “This Year’s Kisses” was described as “an impressive new voice on the jazz scene” by All About Jazz, will entertain guests in the lobby until the Knights of Momus Grand Night Parade approaches the hotel. Back by popular demand, Dr. Michael White and his Jazz Quartet from New Orleans will perform in the Sam Houston Ballroom as ball goers enjoy a sumptuous dinner buffet. White’s clarinet, a legend in the Jazz community, can be heard on Wynton Marsalis’ album “The Majesty of the Blues” and Wynton is on White’s album “Crescent City Serenade” along with musicians Wendell Brunious and Walter Payton.

VIP viewing of the Knight of Momus Grand Night Parade, which passes directly in front of the hotel, precedes the revelry in The Tremont Ballroom with music by retro-swing band Poppin’ Daddies. The Poppin’ Daddies debuted in 1997 with the swing compilation “Zoot Suit Riot,” which sold over two million copies in the United States and became a radio hit.  Known for their mix of swing and ska with modern rock and pop influences, The Poppin’ Daddies released their sixth album entitled “White Teeth, Black Thoughts” on July 16, 2013.

Ball tickets are $200 per person and can be purchased online at www.Galveston.com/MardiGrasBall or by calling The Tremont House, A Wyndham Grand® Hotel, at (409) 763-0300.

For those looking to extend the celebration, the hotel’s two-night Mardi Gras Ball weekend package starts at $1,078 and includes performance by the Dr. Michael White Jazz Quartet on Friday, February 28, two tickets to the Ball on Saturday, March 1, continental breakfast on Sunday, March 2 and complimentary valet parking. Hotel guests also will receive a commemorative Tremont House Mardi Gras Bead as well as other party gifts and souvenirs for the weekend. Weekend packages can be booked online at www.WyndhamTremontHouse.com under special offers or by calling the hotel directly at (409) 763-0300.

The Tremont House Ball, hosted by the Cynthia and George Mitchell family, originated in 1985 with the grand opening of The Tremont House on Feb. 16, 1985 and the revival of Galveston Island’s city-wide Mardi Gras celebration.

About The Tremont House, A Wyndham Grand® Hotel
The Tremont House, A Wyndham Grand® Hotel, is owned by the Cynthia and George Mitchell family as part of Mitchell Historic Properties. The Tremont House is a 119-room boutique style hotel located in the heart of The Strand National Historic Landmark District and Galveston’s Downtown Cultural Arts District. This historic hotel features 14,000 sq. ft. of meeting space, a bistro-style café, fitness center and two bars for entertainment – the 1888 Toujouse Bar and The Rooftop Bar. For reservations, call (409) 763-0300 or visit www.WyndhamTremontHouse.com.

About Wyndham Hotels and Resorts®
Wyndham Hotels and Resorts, LLC, a subsidiary of Wyndham Worldwide Corporation (NYSE: WYN), offers upscale hotel and resort accommodation throughout the United States, Canada, Mexico, Central and South America, the Caribbean, Europe, the Middle East and China. All Wyndham® hotels are either franchised by Wyndham Hotel Group or managed by Wyndham Hotel Management, Inc., or one of its affiliates. Additional information and reservations for all Wyndham hotels are available by visiting www.wyndham.com. Travelers have the opportunity to earn and redeem points through Wyndham Rewards®, the brand’s guest loyalty program, which can be joined for free at www.wyndhamrewards.com.

Wyndham Hotel Group is the world’s largest hotel company with approximately 7,440 hotels and over 638,300 rooms in 68 countries under 15 hotel brands.  Additional information is available at www.wyndhamworldwide.com. For more information about hotel franchising opportunities visit www.whgdevelopment.com.

About Mardi Gras! Galveston
Mardi Gras, the traditional festival of feasting and merrymaking that precedes the season of Lent, was first publicly observed on Galveston Island in 1867. Following a sabbatical imposed in 1941 by war and challenging times, Mardi Gras! Galveston was revived in 1985 by the late Galveston-born preservationist and developer George P. Mitchell. The largest celebration of its kind in Texas and the third largest in the nation, Mardi Gras! Galveston draws more than 300,000 attendees annually, bringing the island’s streets to life with parade viewers shouting for beads, lively tunes played by colorful marching bands, and the infectious merriment that dominates the island for two full weeks. For more information on Mardi Gras! Galveston visit www.mardigrasgalveston.com. 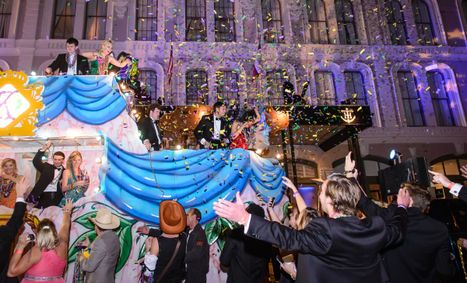 Tremont guests enjoy viewing of the Knights of Momus Grand Night Parade as it passes in front of The Tremont House. 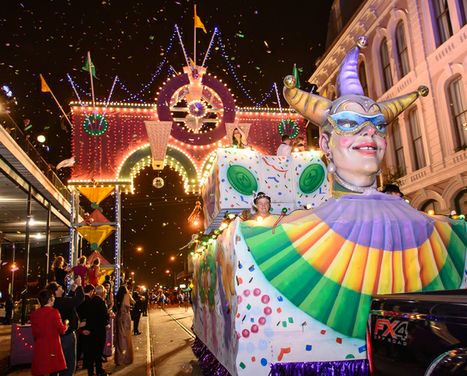 Numerous Mardi Gras parades and processions pass directly in front of The Tremont House during the carnival season.