The Tremont House, A Wyndham Grand® Hotel has been the site of Galveston’s most opulent Mardi Gras Ball and Parade Viewing Party for thirty years and 2014 will be no different. On March 1, 2014 during the 30th Annual Mardi Gras Ball and Parade Viewing Party, revelers can experience Galveston’s heyday of great music, speakeasies and glamour at The Tremont House as it celebrates with the “Pearls and Prohibition” ball.

Beginning at 6:00 p.m. on March 1, The Tremont House is transformed for the ball with live music, dining and cocktails throughout the first floor of the hotel as well as a VIP parade viewing area. This premier Mardi Gras ball offers a prime view of the Momus Grand Night Parade as it passes directly in front of the hotel.

Following the parade, the revelry continues in The Tremont Ballroom with music by retro-swing band Cherry Poppin’ Daddies, known for their hit “Zoot Suit Riot.” Guest will also enjoy prohibition-inspired cocktails and a savory midnight breakfast buffet. Dapper daddies and doll-faced dames are encouraged to dress in a fashion that roars of prohibition and 1920’s glamour.

Ball tickets are $200 per person and can be purchased online at www.Galveston.com/MardiGrasBall or by calling The Tremont House at 409-763-0300.

The Tremont House Ball, hosted by the Cynthia and George Mitchell family, originated in 1985 with the grand opening of The Tremont House on Feb. 16, 1985 and the revival of Galveston Island’s city-wide Mardi Gras celebration.

The Tremont House, A Wyndham Grand® Hotel, is owned by the Cynthia and George Mitchell family as part of Mitchell Historic Properties. The Tremont House is a 119-room boutique style hotel located in the heart of The Strand National Historic Landmark District and Galveston’s Downtown Cultural Arts District. This historic hotel features 14,000 sq. ft. of meeting space, a bistro-style café, fitness center and two bars for entertainment – the 1888 Toujouse Bar and The Rooftop Bar. For reservations, call (409) 763-0300 or visit www.WyndhamTremontHouse.com.

About Wyndham Hotels and Resorts®

Wyndham Hotel Group is the world’s largest hotel company with approximately 7,410 hotels and over 635,100 rooms in 67 countries under 15 hotel brands.  Additional information is available at www.wyndhamworldwide.com. For more information about hotel franchising opportunities visit www.whgdevelopment.com.

Mardi Gras, the traditional festival of feasting and merrymaking that precedes the season of Lent, was first publicly observed on Galveston Island in 1867. Following a sabbatical imposed in 1941 by war and challenging times, Mardi Gras! Galveston was revived in 1985 by the late Galveston-born preservationist and developer George P. Mitchell. The largest celebration of its kind in Texas and the third largest in the nation, Mardi Gras! Galveston draws more than 300,000 attendees annually, bringing the island’s streets to life with parade viewers shouting for beads, lively tunes played by colorful marching bands, and the infectious merriment that dominates the island for two full weeks. For more information on Mardi Gras! Galveston visit www.mardigrasgalveston.com. 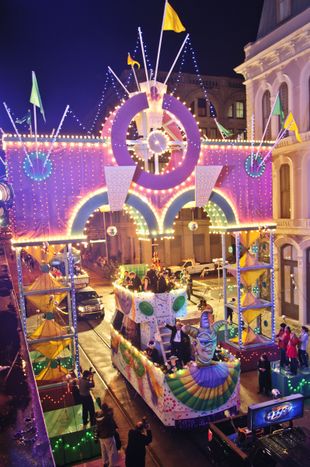 Guests at The Tremont House enjoy prime viewing of the Momus Grand Night Parade as it passes in front of the hotel. 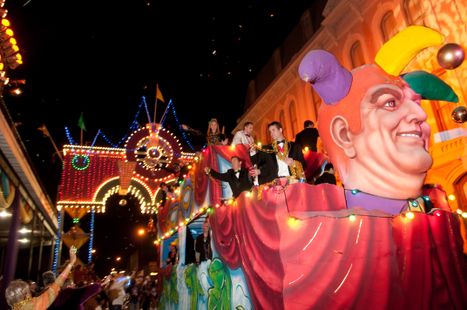 The Tremont House offers live music over the weekend as well as premier viewing of the Momus Grand Night Parade. 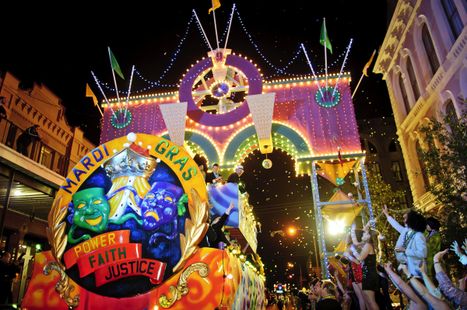 Guests at The Tremont House enjoy begging for beads as the Momus Grand Night Parade passes.