Trio du Jour takes center stage at The Tremont Jazz Series. The Tremont House, A Wyndham Grand® Hotel, hosts a free jazz night every Friday and Saturday from 6 to 10 p.m. in the 1888 Toujouse Bar. Trio du Jour, formed in New Orleans in the 1990s, “Performs hot swingin' jazz from the 1940s to the present with along with some mellow favorites,” says Pianist Leah Stonum. She is joined by Kansas City bassist Mel Drybread and a guest artist that gives the group an ever-changing sound. Sparky Koerner joins the group on trumpet in January.

Leah, a familiar face at The Tremont House, has been seen on the hotel’s grand piano for seven years in the Toujouse Bar. Previous engagements include playing on New Orleans famed Bourbon Street in various clubs, performing with Jason Marsalis, and touring internationally.

Bassist Drybread has performed with many jazz greats through the years. At 20, he was played regularly with Joe Williams, featured singer with the Count Basie Band. He also played with Robert Goulet and did a stint with the old Tonight Show Band.

The Tremont House launched its Jazz Series in September 2014 following a very successful 2013 season. The Tremont Jazz Series is free and open to the public. The hotel offers an expanded Martini menu on Jazz nights in conjunction with this series. The hotel’s Rooftop Bar is also available and open Tuesday through Saturday evenings (weather permitting).

The Tremont House, A Wyndham Grand® Hotel, is owned by the Cynthia and George Mitchell family as part of Mitchell Historic Properties. The Tremont House is a 119-room boutique style hotel located in the heart of The Strand National Historic Landmark District and Galveston’s Downtown Cultural Arts District. This historic hotel features 14,000 sq. ft. of meeting space, a bistro-style café, fitness center and two bars for entertainment – the 1888 Toujouse Bar and The Rooftop Bar. For reservations, call (409) 763-0300 or visit www.TheTremontHouse.com. 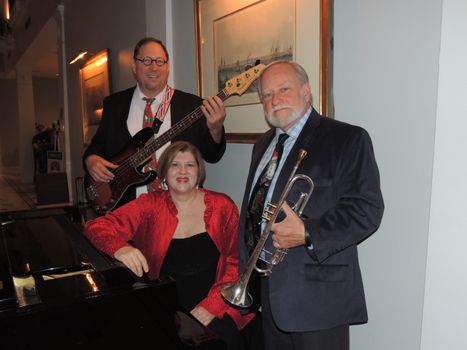 Trio du Jour takes center stage at The Tremont Jazz Series. The Tremont House, A Wyndham Grand® Hotel, hosts a free jazz night every Friday and Saturday from 6 to 10 p.m. in the 1888 Toujouse Bar.